Yoshimi Inoue was born in Tottori, Japan on September 27, 1946. He began his karate-do training in the Shito-ryu system at the Tottori University collegiate club at age 16. Upon graduation from high school at age 18, to the dismay of his parents who hoped for him to become a doctor, Inoue traveled to Osaka to train with the late Grandmaster Teruo Hayashi. Following an old martial tradition, Inoue became an ‘uchi deshi’ [live-in disciple] of Soke Hayashi, to work and train under his watchful guidance and eventually become an instructor. He is the only uchideshi Soke Hayashi ever had. 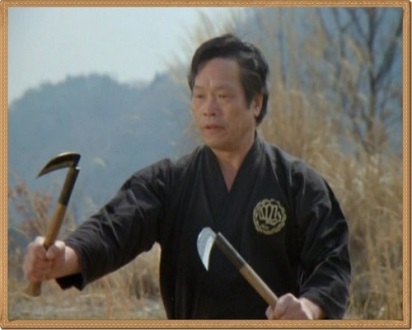 Teruo Hayashi is the founder and Soke of Hayashi-ha Shito-ryu Kai and the Kenshin-ryu style of Kobudo. Soke Hayashi studied under the great master, Kosei Kuniba, a chief disciple of Shito-ryu’s founder, Kenwa Mabuni. Grandmaster Hayashi studied briefly with Master Mabuni, but his early daily instruction came from Master Kuniba. With a hunger for knowledge, Hayashi ventured to Okinawa and became famous there for his practice of traveling to dojo challenging the school’s black belts to kumite matches. Many dojo refused his challenges outright and would not let him in. There were some, however, that accepted. If beaten at one of these schools, Hayashi would stay and ask to receive instruction. It was in this way that Grandmaster Hayashi sought to expand his hands-on karate knowledge and became an excellent fighter, ultimately earning the respect of the Okinawans in this way.

His primary teachers in Okinawa were Shoshin Nagamine and Kenko Nakaima. From Nagamine he learned both the Shuri and Tomari lineages of kata. It was from this Sensei that Hayashi learned the white crane form, Hakkaku. From Sensei Nakaima, Hayashi learned a family art called Ryuei-ryu. This style is a southern tiger style imported from China four generations prior to Hayashi’s arrival in Okinawa. After a year of proving himself to Sensei Nakaima, Hayashi was the first non-family member allowed to study the style. Hayashi incorporated much of Ryuei-ryu’s martial theory into his own system. Upon returning to Japan, Hayashi continued his study with Kosei Kuniba. Hayashi was Kuniba’s number one student. Before Master Kuniba passed on, he asked Hayashi to run his   organization until his young son, Shogo, reached a level of maturity to assume leadership. Honoring his Sensei’s wishes, Hayashi became President of the Seishin-Kai organization in 1959 which he served until 1970 when he relinquished his leadership to the style’s rightful heir, Shogo Kuniba. Teruo Hayashi then incorporated his knowledge and experience into the style he founded, Hayashi-Ha Shito-ryu.

It was in the latter days of his leadership of Seishin-Kai and the early days of the founding of Hayashi-ha that Inoue lived in Osaka as Soke Hayashi’s uchideshi. In a Karate-do magazine interview, Soke Inoue described his life as an uchideshi :

I was Hayashi Sensei’s only assistant. We used to go over Kihon again and again every day….over and over. When we started out there were a lot of beginners; mostly white-belts. But with time we started getting a few more upper belts.

Being alone in the office was pretty boring, so I used to do kumite practice with Hayashi Sensei as well. He was about 41 or 42 and very much in his prime. It’s pretty scary when you get hit hard at the age of 18 or 19. I thought to myself, “if I’m going to get hit, I might as well get hit moving forward rather than pulling back…the quicker I get knocked out, the quicker it’s over” (laughs). But when I did get knocked out, he’d just shout at me “get up!!!”, so I figured it didn’t make any difference if I was knocked out or not–either way, we’d just train till it was over. We’d practice for about two hours until Hayashi Sensei called out “Yoshi!”.

There were two floors to the dojo and we’d practice on the dirt floor on the first floor. One time when doing kumite with Sensei, I was driven right back to the stairs and ended up having to step backwards up the steps to the second floor behind me, but he just kept coming at me, kicking like mad. I don’t know if you could so much as call it kumite as an outright fight…or even murder! (laughs)…but that’s what it was like. We didn’t have any fist-guards back in those days either. There was no way I was going to keep up with him, and it wasn’t like it was a match or anything. That’s why I tried to make a body that could stand up to it and the body you see in this picture came about as a result of that practice. 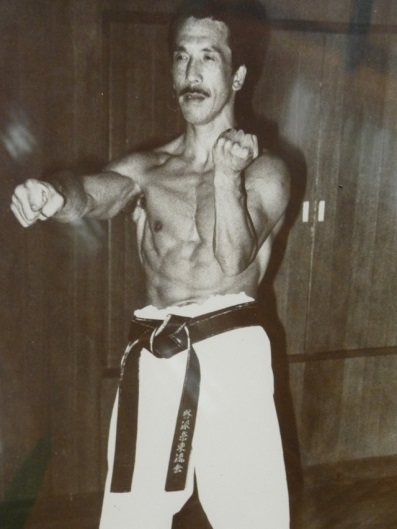 At the time, however much I got punched or kicked, I was still always well up for it. The training was pretty tough, but Hayashi Sensei had a really kind nature. He was pretty strict about manners and never once hit me outside of practice. The great thing about karate is that through training you become stronger. (see full interview)

With the onset of illness in his father and being the oldest son, Soke Inoue was called back to Tottori. Desiring to carry on with karate and upon discussing the situation with Soke Hayashi, Inoue was encouraged to open a dojo. He did so becoming a branch in the Hayashi-ha Shito-ryu style. 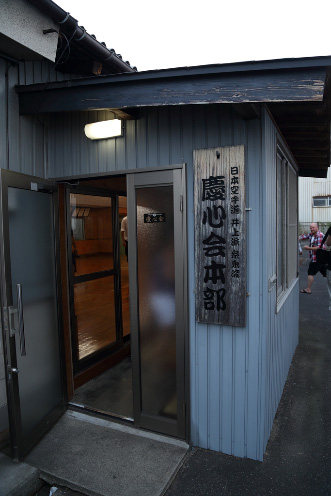 Over the years Soke Inoue became a much sought after competition coach and Tottori Hombu dojo the training ground for over 20 world champions from a variety of karate styles, starting with Sensei Mie Nakayama, the 3-time world champion kata gold medalist and one of the most highly accomplished female karate competitors in the world.

In 1986, Soke Inoue was honored to represent the Shito-ryu style as four people were chosen from Japan by the government, one from each major style of Japanese karate, to tour America, hosted by the Consulate General’s office, giving Karate demonstrations. In Washington D.C., he found himself giving the American President’s wife self-defense lessons.

Most recently at the 2012 World Karate Federation Championships history was made when both the Female (Rika Usami) and Male (Antonio Diaz) kata champions were from the same karate organization.

Soke Inoue is the youngest in the history of the Japanese Karate Federation (JKF) to be awarded 8th Dan. He has been a Japanese National Team Coach and is a current advisor to this and other national teams and serves on the Japan Karate Federation Board of Examiners.

Soke Inoue remained loyal to Hayashi-ha throughout the lifetime of Soke Teruo Hayashi and founded Inoue-ha Shito-ryu Keishin-kai, incorporating his own knowledge and experience, after a year-long period of bereavement following the death of his teacher in 2004.